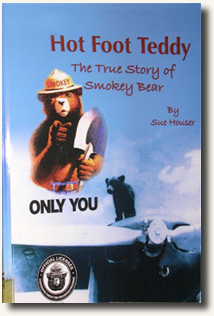 Hot Foot Teddy: The True Story of Smokey Bear was my first book. I attended Smokey Bear’s 60th birthday celebration in Capitan, New Mexico. The two-day event drew over 4,000 people who ate birthday cake and sang “Happy Birthday” to Smokey Bear. I said, “Someone should write a book about this famous bear.” And so, I did.

This book chronicles the rescue of Smokey Bear from a forest fire in southern New Mexico and his rising fame as the national icon for fire prevention. Licensed by the U.S. Forest Service, this 40-page book is filled with historical photographs. It is popular with children of all ages. (MT Publishing, 2007)

You can purchase this book via Amazon or  MT Publishing

“… elementary and middle school students will be well-served in learning about Smokey and his fire-prevention message from this book. It will help readers of all ages realize how one New Mexico creature made a significant difference.”

“… a historical tale of survival against all odds. The author brings the black bear back to life in this inspiring account of the events …”

“You have managed to enrich many New Mexicans’ memory with the obvious pride attached to this national treasure.”

“… full of interesting facts and unusual Smokey Bear trivia, including insight into why so many people mistakenly say ‘Smokey the Bear’.”