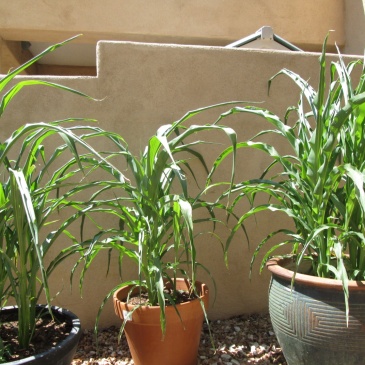 In addition to the books listed under Story Sources at the back of The Corn Whisperer, I found these two books to be quite informative and useful to the blogs on my website.
The Story of Corn by Betty Fussell
Coming from Midwestern corn farmers, the author weaves in personal antidotes with the history of corn. Fussell traveled through South America and across the United States researching this ancient grain and its impact on western civilizations. Ms. Fussell spent considerable time in the Southwest, documenting the role of corn in myth, religion, and culture.
Believe in the Corn: Manual for Puebloan Corn Growing by Robert Mirabal and Nelson Zink
According to the authors, in 1920 there were about 48,000 Native American farmers in the United States. By 1982, there were about 7,000 and today, even fewer.  Mirabal and Zink are making a concentrated effort to revitalize pueblo agriculture at Taos Pueblo in New Mexico. They plan to grow corn in an effort to protect water rights at the pueblo and to start a movement to protect the traditions and religious practices related to corn.
This manual provides step-by-step guidelines for growing corn― the pueblo way―beginning with selecting the seeds through harvesting the corn. Included are songs for singing up the corn and calling for the rain.
After reading these books, I felt inspired to grow Indian corn myself.  On May 26th (the day following the New Moon) I planted corn kernels in three large pots on my patio. I’m enjoying tending the plants and watching their growth.

One of my favorite day trips is to the Quarai National Monument. Situated between the Manzano Mountains to the west and endless turquoise skies to the east, Quarai is a quiet, austere reminder of New Mexico’s early history.
Around 1300 AD, prehistoric Pueblo Indians established the village of Quarai next to flowing springs and salt-filled lakebeds only a day’s journey away. They raised corn and other grains along with squash and beans. When Europeans arrived in the late 1500s, they found a thriving village of 600-800 people―an ideal location for Spanish missionaries to settle and convert the Indians. A mission church was built in 1626 alongside a kiva where indigenous people were allowed to practice their own traditions along with the new Christian religion. But over time, a combination of drought, disease, famine, and waring Apaches caused the population to dwindle. And by the late 1670s, the village had been completely deserted.
A weathered, metal marker standing next to the forsaken stone church reads:
. . . for three years no Crops have been harvested. Last year a great many Christian Indians starved, left dead along the roads in the ravines and in their huts. There were towns like Las Humanas where more than 450 starved. Now the same Calamity still prevails, for in the whole kingdom there is not a bushel basket of corn, nor of wheat to be had at any price.
Friar Juan Bernal, April 1, 1669
Quarai is one of the three Salinas Pueblo Missions managed by the National Park Service. The nearest town is Mountainair, New Mexico.
Most of the New Mexico pueblos hold dances throughout the year. There are summer dances and winter dances. There are fall dances and spring dances. But all corn dances speak to the rain because rain mediates between sun and earth―the father and mother of corn.
The schedule for dances at various pueblos is available at the Pueblo Cultural Center in Albuquerque, New Mexico,  or the New Mexico Tourism Department.
When visiting a pueblo, be respectful of the community―as if you were entering a stranger’s home. 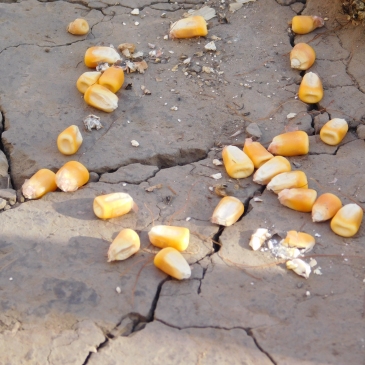 Corn, a grain, is also known as maize. When Christopher Columbus landed in the New World in 1492, the people he called Indians were expert farmers. When he returned to Europe, Columbus reported the Indians grew “maize,” which sounded like the name the Indians used: Zea Mays.
But when the Pilgrims arrived in 1692 on the East Coast, the Pilgrims called the grain “Indian corn” to distinguish it from British corn, which meant any type of grain, especially wheat. The Indians taught the newcomers how to grow, harvest, and store corn, which literally kept the colonists from starving to death during the harsh winters.
Corn has the highest yield of any agricultural plant. For every grain planted, it returns 150-300 grains.
In 2015-2016, the world’s consumption of corn was over 40 million bushels. The United States led in corn consumption at 12,360 million bushels. China was second at 8,937 million bushels followed by Europe, Brazil, Mexico, Japan and Canada. Other countries produced fewer bushels.
The states with the highest corn production were: Iowa, Illinois, Nebraska, and Minnesota followed by Indiana, South Dakota, and Kansas.
As the population increases, there will be an even greater demand for this grain that evolved thousands of years ago.

Author and poet Katherine B. Hauth gave me permission to share the following comments along with her poem.

“After enjoying the voice-and-illustration pairing of The Corn Whisperer stories, I returned to the professor’s introductory account of the science behind listening to corn. As a writer of nature and children’s poetry, I was intrigued and inspired to write the following poem. I also have a desire to hear corn for myself some day.”

Where the corn grows
on humid nights,
quiet and still,

between howls of distant coyotes
as water and minerals rise
from moist soil.

for ever-so-faint
popping and cracking
as cells expand

from roots through stalks
to leaves.

Katherine Hauth is the author of What’s for Dinner? Quirky, Squirmy Poems from the Animal World and Night Life of the Yucca: The Story of a Flower and a Moth.

I grew up on a farm where we raised sweet corn. When the cornstalks were tall and the kernels were young, we gathered corncobs in their tightly-wrapped husks. Their silks were dry and bristly. I recall the swish of leaves when walking between the rows of corn and the crisp snap of a corncob breaking from the stalk. It wasn’t a chore to gather corn for the supper table. The result was a platter of steaming hot, tender ears of corn slathered in butter. The particular variety of sweet corn we raised was called Kandy Korn.
Today, there are hundreds of varieties of corn, which come in many colors. However, the most common varieties are sweet corn, dent corn, flint corn, and popcorn.
Flint corn (Zea mays indurata) has a high nutrient value and gets its name from having a hard outer layer―hard as flint. This flint variety is resistant to freezing, tolerates drought, and favors the sandy soil of the Southwest. It is often dried and used to make hominy. One multi-colored type of flint corn is called Indian corn or calico corn.
Dent corn or field corn actually has a dent or dimple in the top of the kernel. It has a higher, softer starch content than flint corn. It is primarily grown as feed for livestock or the production of ethanol but can also be ground for flour, grits, or cornmeal.
Popcorn is a completely different variety―a special type of flint corn. Each kernel holds a tiny droplet of water tightly enclosed in a hard shell. When the hard kernels get hot, the water droplets inside get hot and turn into steam. Pressure builds up and―pop! The steam disappears into the air, leaving behind a pile of fluffy-white, crunchy snacks.
Although there are hundreds of kernels on an ear of corn, there is always an even number of rows.
Count them.

Corn is a grain, a member of the grass family―along with wheat, rye, oats, barley, and rice. Also known as maize, corn is one of the oldest grains found on Earth. Scientists have discovered tiny ears of corn, which they claim to be over 5,000 years old, in a cave in southern Mexico. Other scientists claim to have found evidence that corn is even older.

Corn’s ancestor has been traced to a plant named teosinte that still grows wild in Mexico. Indigenous people nurtured these native, scrawny teosinte plants, which produced stems with tiny grains. From each crop, they planted the best grains and―generations later―the plants began to resemble cornstalks with tassels and silks. The plants continued to evolve and, eventually, fertilized themselves. The pollen from each cornstalks’ tassel fell onto its own corn silks and traveled down each thread of silk to the cob to produce kernels of corn.
Ancient Native Americans in Central and South America found that these kernels could be stored for long periods of time and that eating these healthy kernels physically sustained them. Maize became their main food source.

Meanwhile, sometime prior to 2100 BC, maize made its way northward into the Southwest. The earliest evidence of corn being grown in this country was found in New Mexico and Arizona. Corn became a staple for the Anasazi, early inhabitants of the region. Growing corn may be the very reason some Indians settled down and formed pueblos―so they could grow corn.

But years of drought dried up the cornfields in the Southwest. And when the corn was gone, people moved. Now, unfortunately, less and less corn is being grown by descendants of its earliest native farmers.

In 2010, Robert Mirabel and Nelson Zink established Tiwa Farms at Taos Pueblo to revitalize pueblo agriculture and farm corn. According to Mirabel, the people have an important relationship with corn. Although corn fertilizes itself, it cannot re-seed itself. Corn depends on people to prepare the ground, plant the kernels, pull the weeds, and water the plants.

In turn, corn provides people with nutritious food and food products. Corn provides feed for livestock. And left in the field, corn serves as mulch for the soil. Cornstalks support the vines of beans and squash. Cornhusks are used in weaving and making dolls. Ornamental corn is used for decoration.